Brazillian President Dilma Vana Rousseff has won out on the long battle to steal the Kayapo tribe's land for the use of building a hydroelectric dam. People seem more wrapped up on pointless things like the reality tv and if the so called rapture is real. Real people's lives are at stake due to human doings; no more less by gods and imaginary beings in the sky. Puts perspective on things...

Belo Monte Dam - via: wikipedia
Posted by Alex Pascual at 8:50 PM No comments:

http://singlepieceslate.com/
Posted by Alex Pascual at 11:28 PM No comments:

Lisa Gunn - Sculpture Artist: Trauma and Healing of the Body

Lisa Gunn's art is on exhibit at the Herbert Art Gallery and Museum. She explore's her own body's journey from the trauma she faced with her accident and its path to healing.

"Gunn's work is primarily concerned with her own personal and emotional responses to body trauma. Her sculptures focus on growth, healing and preservation, while her films explore the overwhelming power of nature and its ability to age and erode."

news/details - via - theherbert.org
Posted by Alex Pascual at 11:16 PM No comments:

Many people may have seen the slight, even humorous, spectacle that occurred at the Mexican Electrical Workers Union (Sindicato Mexicano de Electricistas - SME) protest in Mexico City. The worker's union had the support of their own El Luchador del SME.

As his presence is assuredly a welcomed if not inspiring one, the focus of the matter still lies in Mexican President Felipe Calderon's decision to lock over 44,000 SME workers out of their jobs since October 10, 2009.

"The Mexican Electrical Workers Union (SME) has asked for international solidarity in resisting the government liquidation of their company, the termination of the workers, and thus the destruction of the union."

The following link provides a short statement and the email of President Felipe Calderón. Stand with the Mexican Electrical Workers Union

publications and news- via UEINTERNATIONAL.ORG

"Using Tor protects you against a common form of Internet surveillance known as "traffic analysis." Traffic analysis can be used to infer who is talking to whom over a public network. Knowing the source and destination of your Internet traffic allows others to track your behavior and interests."

"Tor is a network of virtual tunnels that allows people and groups to improve their privacy and security on the Internet. It also enables software developers to create new communication tools with built-in privacy features. Tor provides the foundation for a range of applications that allow organizations and individuals to share information over public networks without compromising their privacy."

Posted by Alex Pascual at 1:36 PM No comments:

"A DOCUMENTARY ABOUT PRIVACY, SURVEILLANCE AND THE DATABASE STATE"

"David Bond lives in one of the most intrusive surveillance states in the world. He decides to find out how much private companies and the government know about him by putting himself under surveillance and attempting to disappear, a decision that changes his life forever. Leaving his pregnant wife and young child behind, he is tracked across the database state on a chilling journey that forces him to contemplate the meaning of privacy and the loss of it."

Erasing David is a documentary about David Bond's experiment in attempting to become anonymous in a data driven world, while openly challenging investigators to attempt and track him down. Forgoing everything from his online presence to electronic forms of currency, David explores the far reaches for true anonymity through this journey away from the world's prying eyes.

Posted by Alex Pascual at 1:10 PM No comments:

Queen visits The Garden of Remembrance in Central Dublin

"In a hugely symbolic gesture reflecting a new era in relations between the countries, the British monarch bowed her head as she laid a wreath at the memorial for those who died fighting for Irish freedom, before observing a minute’s silence."

story via BCC News
Posted by Alex Pascual at 10:37 PM No comments:

"Namibia's civil war started in 1966 and lasted 22 years. In 1990, when Namibia at last gained independence from South Africa, it was one of the first countries in the world to write protection of the environment into its constitution. It was as if Namibians recognized that having fought for the land beneath their feet, they were now profoundly responsible for it."

Filters Bubbles, a term coined by Eli Pariserm, is basically the culmination of personalization algorithms that are present though out the internet; most notably on sites as Google, facebook, and twitter. These algorithms take note of habits on the internet and attempt to create a web experience that is curtailed to your likes and interests. Sounds like a good thing perhaps, but as explained the inherently mathematical algorithms degrade the diversity of information and isolate the user from potential useful or insightful information.
Posted by Alex Pascual at 11:09 PM No comments:

MEMES are the DESTRUCTION of ART -

Posted by Alex Pascual at 9:41 PM No comments:

Email ThisBlogThis!Share to TwitterShare to FacebookShare to Pinterest
Labels: are, art, destruction, memes 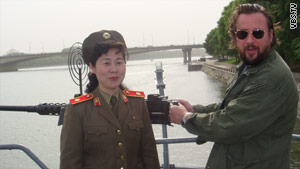 Editors of Vice magazine get the hesitant okay to visit North Korea. The experience proves to be a strange mix of accommodating hospitality and over-watching suspicion. A rare look into the insular socialist "utopia".

Story via CNN.com
Posted by Alex Pascual at 9:06 PM No comments:

Great link to watch segments about contemporary and upcoming artist as brought to you buy VBS.tv, the broadband video network of Vice magazine.

Art Talk via vbs.tv
Posted by Alex Pascual at 8:55 PM No comments:

Though even in his absence, Ai Wei Wei's influence perpetuates. Flash Graffiti artist Cpak Ming projected an image of Wei Wei on the barracks of The People's Liberation Front.

"The People's Liberation Army in Hong Kong has taken the unprecedented step of saying it "reserves its legal right" to act over what it says was a breach of Hong Kong law when activists campaigning in support of Ai Weiwei projected the detained artist's image onto a wall at the PLA barracks in Admiralty."