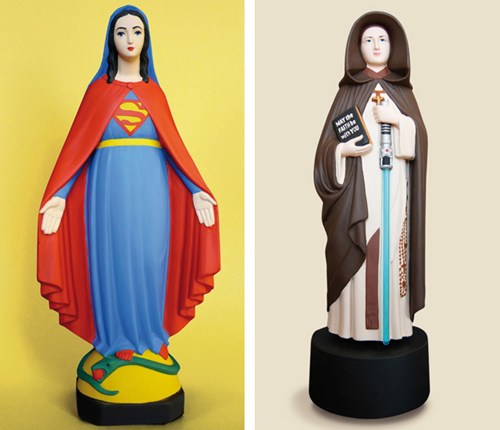 I grew up in a Christian Western society. My perspective on life has been a result of my environment and background.
The playful interaction of society’s many icons, physical transformations, and the resulting improbable combinations, have culminated in my vision of a woman’s role and place in our society.
This inner questioning of a woman’s role, has led me to use one of the most sacred icons in my work, namely, the Virgin Mary.
Initially, I begin with damaged statues, either donated or discovered in garage sales, which I then restore and transform.
I surely do not mean to chock those who believe but rather to move those who see.

I can relate to this artist's aesthetic.  Having grown up in a Catholic environment my self from the upbringing and tradition in my family and 13 years of Lutheran, Catholic, and Jesuit school combined, the grotesque and morbid images of western religion permeate my mind.
The juxtaposition of pop-culture and religion with these sculptures blend the iconic-ism of both ideas of nostalgia and spiritual worship.  The ambiguity blends the idea of what people idolize with imagery and challenge their validity and/or importance.
I have a few religiously based tattoos; a Frida Kahlo Virgin Mary and a seraphim angel.  As it is, I am an atheist, basing my morality on reality, emotion, and experience rather that based in a traditional western spirituality.  But with my upbringing I can't help but be engrossed in the imagery of the Catholic imagery of my childhood.  It is ingrained in me as such that they have this aesthetic relevance.
Posted by Alex Pascual at 8:14 AM No comments: Graziano Panfili's photograph series of man "landing" on earth.  The idea of man and his-self exploration.  An immediate visual of the physical; the image of an astronaut in a stunning, yet recognizable and even familiar setting.  The suit serving a constant barrier to the environment, the astronauts remain only as observers to their surroundings.  The reflection of the physical, to land in one's own "backyard", can in part psychological and as much as metaphysical.  How well does humanity know itself?  To be an observer of our own actions, of our existence?  But also begs the question of our curiosity of exploration to the outer and into the inner.
Posted by Alex Pascual at 8:35 AM No comments:

Posted by Alex Pascual at 11:30 AM No comments:

Our Story In 2 Minutes

Song: Mind Heist
By: Zack Hemsey
Posted by Alex Pascual at 10:06 AM No comments: